Come to the Cabaret, Old Chum. Or at Least Stream It .

New concerts from Sutton Foster, Jeremy Jordan and Marilyn Maye offer examples of what the most intimate art form can and can’t do. 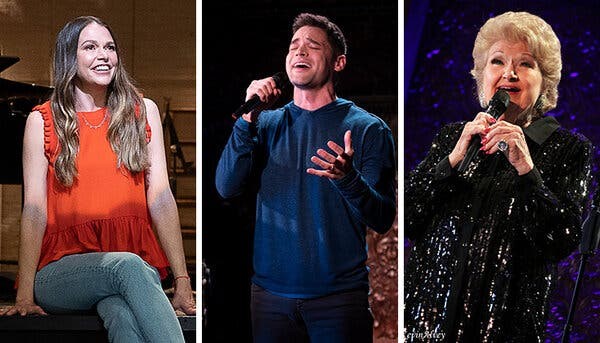 From left: Christopher Duggan Photography, Jenny Anderson and Kevin Alvey, via 54 Below

Cabaret is a magpie medium, plucking pieces from the world’s songbook and repurposing them to tell more-or-less personal stories.

Whether the result is sublime or mortifying (or, more typically, in between) depends on how cleverly singers shape their material to fit the contours of the tales they’re telling. Vocal beauty is a secondary matter — as any number of old-school performers, like the swinging Sylvia Syms and the barking Elaine Stritch, proved by keeping the form alive even when they had almost no voice left.

But the pandemic has nearly done the old bird in; the intimacy of most cabaret performance spaces, and the likelihood that a singer may spit in your chicken Kiev, have made live shows impossible. If there have nevertheless been some astounding virtual concerts in the tradition, including one Audra McDonald gave for a New York City Center gala, that doesn’t make the real thing any less valuable.

Until live cabaret’s day, or rather its evening, returns, high-profile offerings from Sutton Foster, Jeremy Jordan and Marilyn Maye are here to entertain and instruct us. These three performers sing very well indeed, in very different styles and with very different material. But it’s their completely divergent uses of the form that make them stand out as examples of what cabaret can and can’t do best.

One thing it can’t do at all is refuse to tell a story, even if that’s what a singer intends. Foster’s concert “Bring Me to Light,” also for City Center, tries hard anyway, deliberately defocusing its star and keeping psychology on a very short leash. The effect is so extreme that Foster seems more like the host of the occasion than the occasion itself, pushing her spotlight onto guests including Kelli O’Hara, Raúl Esparza and Joaquina Kalukango, who steals the show with “The Life of the Party,” from Andrew Lippa’s “The Wild Party.” Foster even gives a solo — “Here I Am,” from Disney’s “Camp Rock” — to Wren Rivera, a student of hers at Ball State University.

In other words, despite having starred in seven Broadway shows and winning two Tony Awards, the first for “Thoroughly Modern Millie” in 2002, Foster is a sharer, not a self-aggrandizer. Instead of filling gaps between songs with the de rigueur résumé-by-chitchat, she chipperly interviews her pals. And though the title of the show is taken from the finale of “Violet,” the Jeanine Tesori-Brian Crawley musical Foster led at City Center in 2013 and on Broadway in 2014, the tunestack of “Bring Me to Light” tends to avoid material strongly associated with its star. Mostly, it offers songs she is unlikely to be assigned onstage (“How to Handle a Woman”) or that come from other genres entirely. She and O’Hara make a lovely duet of Joni Mitchell’s “Both Sides, Now.”

• Dig deeper into the moment.

This is all professionally rendered — as is the show itself. (The director is Leigh Silverman; the music director, Michael Rafter.) It looks fantastic in the plush if empty City Center auditorium. But at no point does it offer us the Sutton Foster who is so commanding when she plays a role that she can disappear into it before emerging transformed. Actually, at one point it does, when she bounces through the backstage hallways in jeans and then, in a nice jump cut, pops onto the stage in a sparkly gown. The song is the ambivalently titled “Hey, Look Me Over.”

From Sutton Foster’s “Bring Me to Light,” at New York City Center.

If Foster’s show tells the story of a star who avoids too much drama, “Jeremy Jordan: Carry On” heads in the opposite direction. It is bursting with drama, more than its little canoe of gorgeously sung songs can carry without tipping.

The premise is both affecting and overwrought: that when he became a father in 2019, Jordan realized he had to unburden himself of unresolved conflicts from his own childhood before he could properly parent. Hence the pun in the show’s title, which is not just a command to keep going but also an actual piece of luggage filled with keepsakes that represent youthful traumas he must unpack.

These are not the kind of traumas that are too piddling to earn a hearing; Jordan tells a brutal tale, involving abuse, drugs and a catastrophic car accident. The problem is that there aren’t many songs available to reflect and shape those traumas, so he must jury-rig existing ones (or, as in two cases, write new ones) to make a case for singing at all. Even so, as in a jukebox musical, they rarely fit, especially the ones associated with his own career, like “Broadway, Here I Come!” from “Smash,” and “Santa Fe” from “Newsies.”

Perhaps “Carry On,” filmed without an audience at Feinstein’s/54 Below, would have been better off if Jordan hadn’t written, directed and performed it all himself. But learning to calibrate the emotional temperature of a room — and of one’s material — is a skill that comes only with experience. Jordan is 36; Foster, 46; together, they do not add up to Marilyn Maye’s 93 — an age that helps explain the distillation of her gifts and also her preference for classic material. “Broadway, the Maye Way,” another installment in the Feinstein’s/54 Below series that presented Jordan’s concert, consists mostly of show tunes, heavy on Jerry Herman, from musicals she’s been in, although never on Broadway itself.

Maye, who started singing professionally in the 1940s, has run the gamut of outlets: radio, television, film, nightclubs, regional revivals, summer stock, concert halls and now cabaret. That is by no means a downward trajectory, but if anyone has the life experience to sing songs like “I’m Still Here,” from “Follies,” she does, with her “three cheers and dammit” verve. That would be enough in this repertoire, but Maye also brings to bear her wonderfully natural phrasing, her generous but not overstated swing and her big wallop of a voice in fantastic shape.

From Marilyn Maye’s “Broadway, the Maye Way,” at Feinstein’s/54 Below. It’s hard to say whether she’s so good at singing optimistic Broadway barnburners like “I’m Still Here,” “Step to the Rear” and “Golden Rainbow” because they were written for voices like hers (she recorded the original hit version of “Cabaret” in 1966, and sings it again here) or because she has chosen them carefully to reflect what appears to be her actual personality.

Probably, it’s both. The moto perpetuo arrangements by her musical director, Tedd Firth, certainly highlight her bubbliness and drive, but when she sings “Fifty Percent” from “Ballroom,” a number about a widow in love with a married man, the alteration in its effect is clearly coming from her. It’s no longer a torch song but a glass-half-full anthem.

What Maye has mastered is the proportioning of restraint and release that allows the safe exchange of emotion between singer and audience. In a small room — and online, every room is small — that’s key. It’s how cabaret even under lockdown can remain an affecting art and not just a jukebox musical with sequins.


Sutton Foster: Bring Me to Light