Maye Dazzles and Inspires, but That’s Not News — Appearing through April 23

In an uncertain world, one thing you can always count on is being uplifted and your cup of cheer will runneth over when entertainer extraordinaire Marilyn Maye is holding court in the spotlight. In the World According to Maye, although her birthday of April 10th marked her opening night and is now more than a week in the past, “I claim the whole month.” She tells us you can do that when you get to the age she consistently defies. She makes audience members feel as high as the kicks she kicks in her signature song, “It’s Today,” the reasonable reason for a celebration, “although it may not be anyone’s birthday” — although she slips in the fact that this night was the actual birthday of an audience member she knows. When it comes to solid, 24-karat surefire entertainment, Miss A-OK Maye takes the cake. Leave it to the perky, plucky Party Girl to get to the end of the show and tweak the lyric of “The Party’s Over” to sing “The party’s not over,” as that’s too much of a downer and her parties are “a ball” and she hits that ball out of the park, and life is a fun-filled game that goes into extra innings. That being said, much of her repertoire this time was on the serious side, with a double header of extra-marital affairs explored in song: her most-requested piece, “Guess Who I Saw Today,” followed by “Fifty Percent” (which is, as ever, one hundred percent on target). And “When the World Was Young” (“Ah, the Apple Trees”) played the wistful card of nostalgia with a rare grace and much nuance. While some arrangements are decorative and dense, “God Bless the Child” (not frequently done by this singer) is refreshingly spare and laser-beamed direct, starting a capella, needing no frills or fancy fuss to nail its message of self-sufficiency. But there was also spark, sparkle, and spunk in this show titled Carrying the Torch, which is what she says she’s doing for the legacy of the Great American Songbook she loves. And she does it superbly. Occasionally, she’ll veer away from the classics. Case in point: She coyly “advises” the young and not-so-young listeners to heed her sung brash advice to “Get yourself a rich man” (in the country-ish sassy “Rich Man” by Ed Mattson, mixed with a bit of “If I Were a Rich Man” from Fiddler on the Roof wherein she substitute scatted syllables for the Hebraic prayer chanting). Two numbers, both with Broadway origins within a few years of each other, tell us of messages sung by the wind: in “Any Place I Hang My Hat Is Home” from St. Louis Woman, “there’s a voice in the lonesome wind, whispering ‘Roam!'” and in “Joey, Joey, Joey” from The Most Happy Fella, leaving town is also “what the wind sings to me.” Sometimes the wind has good advice, welcomed by a lady whose life has been traveling from town to town. 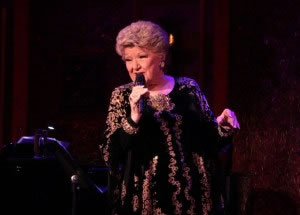 And, gratefully, she talks about how much she enjoys returning to The Big Apple a few times each year, ever since she was embraced at the Cabaret Convention at Jazz at Lincoln Center, and re-introduced to NYC audiences after a decade and a half of not playing here. And, in the follow-up engagement at the then-new Metropolitan Room, where she says, “I figured about four people would come, because I knew my lawyer was coming and bringing three people”.

She claims happy surprise that the room was packed.

I was in that audience, and will always remember the exultant energy of singer and audience and her delight, as well as her saying that she thought some came out of gossipy curiosity to see if she could get up on stage alone or with a walker or….? And it’s been a second volume of New York love fests ever since.

One Manhattan past highlight recalled, understandably proudly, was being included in a Carnegie Hall birthday tribute to Stephen Sondheim, putting the icing on that birthday cake at the end of the night with a spectacular “I’m Still Here” (another night I’ll long recall), the song reprised to huzzahs in the show, which runs through, Sunday, April 23rd.

The voice is strong, notes are sustained, the woman is masterful. She digs her audience, she digs her musicians (“That was good!” she admiringly remarks when the magnificent pianist Tedd Firth unfurls one of his many robust, jazzy phrases. Another time she just reacts nonverbally with a grin and a look of contented surprise.) Bassist Tom Hubbard and drummer Daniel Glass are the two other formidable members of the trio speeding forth with Firth for solid and interesting musicianship sans schmaltz or cliché. I’d just suggest she introduce them by name earlier, rather than waiting til the end.