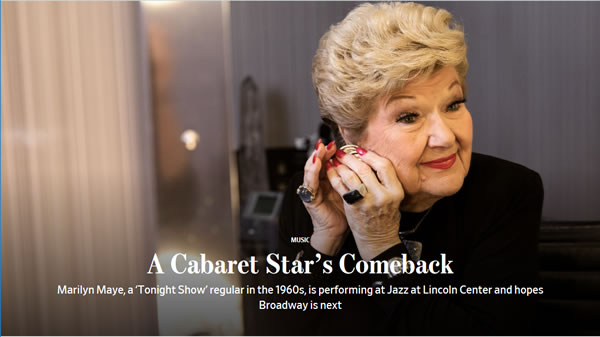 Marilyn Maye never expected a career resurgence in her 80s.

But after a nearly two-decade break from the big stage in New York, the cabaret star known in the 1960s for her jazz performances, hit singles and regular “Tonight Show” appearances is experiencing a comeback, playing popular jazz-cabaret venues such as the Dizzy’s Club Coca-Cola and Feinstein’s/54 Below. In February, she will perform at Jazz at Lincoln Center, a major venue in New York, with signature songs that include, fittingly, Jerry Herman’s “It’s Today” and Stephen Sondheim’s “I’m Still Here.”

“It’s exciting because the applause now that I’m getting on is so big,” Ms. Maye says.

Her audiences encompass Broadway and cabaret fans as well as jazz and blues enthusiasts, one reason singer, pianist and nightclub owner Michael Feinstein cites for her renaissance. “What may have been too jazzy for mainstream 40 years ago is very popular with contemporary audiences,” he says. “She is tireless in keeping it fresh, and most people do not have the stamina nor the ability to do what she does.”

In lively, sassy performances, Ms. Maye sings, dances and banters with the crowd, declining offers to sit, even when an audience member offered a bar stool.

“If you weigh 90 pounds, you can sit on a bar stool and sing. But above that, you just look awful,” she says. “Your stomach hangs out.”

For similar reasons, Ms. Maye has never taken to short skirts. “Knees are ugly,” she says. “I say never wear a short wardrobe or bare arms unless you’re very, very thin, because that spotlight shows everything.” Born in Wichita, Kan., in 1928, Ms. Maye began singing in amateur contests when she was 9, winning a 13-week appearance on a Topeka radio station. Her mother, a pianist, and her father, a pharmacist, divorced when she was a teenager, and she and her mother moved to Des Moines, Iowa.

There, she started her own radio show called “Marilyn Entertains.” Once a week, “I would walk out of my Spanish class and sing,” she says, her friends watching through the glass.

After high school, Ms. Maye played hotels and nightclubs in the Midwest, including the Drake Hotel in Chicago, eventually opening a dance studio with her husband in Kansas City, Mo. Television host Steve Allen saw her singing at a club there and invited her on his show, where her appearances led to a recording contract with RCA. Her 1965 debut album, “Meet Marvelous Marilyn Maye,” led to a Grammy nomination for best new artist. She went on to record half a dozen more albums and 32 singles.

But it turned out she got into jazz cabaret in the wrong decade. As dinner theater started to decline in the late 1960s and early ’70s, she worked in musicals such as “Hello, Dolly!” “Can-Can” and “Mame.” But within a few years, even those opportunities started drying up as the U.S. grappled with economic stagflation.

At the same time, the American songbook was being replaced in popular culture by rock ’n’ roll, whose more repetitive choruses didn’t interest Ms. Maye. “That’s the money bag, but unfortunately that’s not what I do,” she says. For her, “it’s all about the lyric.”

She returned to Kansas City, performing mostly in regional nightclubs and venues in the Midwest and Texas for about 20 years. Then, in 2005, after 16 years without performing once in New York, music manager Donald Smith asked her to play at the Mabel Mercer Cabaret Convention. The program was a tribute to Mr. Herman, who wrote the music for “Hello, Dolly!” and “Mame.”

Ms. Maye’s performance was such a hit that she returned to the convention the following year and booked a performance at the newly opened Metropolitan Room. When she emerged from the taxi, she was shocked by the size of the crowd waiting to see her.

“They were lined up down the block,” she remembers. “That kind of started me back in New York.” Ms. Maye in rehearsal. Photo: Allison Michael Orenstein for The Wall Street JournalMs. Maye has since returned to New York more frequently, performing regularly at the Metropolitan Room as well as the 92nd Street Y and Birdland. Two years ago, she performed for the first time at Jazz at Lincoln Center’s annual gala, a hallmark for jazz musicians and performers, and this fall had her first solo show there. She is slated to play two shows a night at Dizzy’s Club Coca-Cola at Jazz at Lincoln Center from Feb. 15 to Feb. 18.

Now that she’s back on the New York circuit, Ms. Maye has big plans. She hopes to land a role in a Broadway musical. “I could do ‘Dolly’ again,” she says. She would also like to bring her solo show to Carnegie Hall.

Ms. Maye is celebrating her 90th birthday with an April run at 54 Below—her birthday night, April 10, is already sold out. But she doesn’t want people to come see her just because of her age, she says.